Recently, at the gracious invitation of Jen G, I got to go to CMA  to talk to Project Pivot; the coolest group of teens I’ve met (and so stylish! Maybe it’s because I’m from Indiana, and the 90’s but these kids looked awesome.) This was also the first time since college that anyone asked me to think about my artistic practice and turn it into something serious and coherent (which was eye-opening). The group’s working on social practice within art, something in which I have a large interest.

After a brief talk about how I became ‘a painter who doesn’t,’ they helped to create the Third public performance of what is now known as ‘The Letterbox Project.” (if you were near Broad Street around 2pm you might’ve seen it.) They. Were. Awesome.At one point I asked “What do you guys think it takes to become an artist?” Had you asked me that five years ago I probably would’ve said “Uh, graduate from art school? Go to grad school? Have someone buy my things?” These guys responded with answers like “passion.” “risk-taking” “keep working on your skills.” Rock. I can’t wait to hear what they decide to do for their project.

Thanks Prezi.com, for making me seem tech savy to a group of Gen Z'ers! 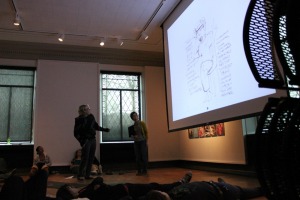 An impromptu, DRAMATIC reading of Laura's drawing. You go!

Also got to hear Kenay Kash speak, which was mind-blowing. I’ve known Kenay for a while through our mutual involvement with CMA, but I had no idea he designed the Metal Head connector in the Wonder Room. Or that he was a complete artistic badass. Be sure to check out his other site, too- Puntitler.