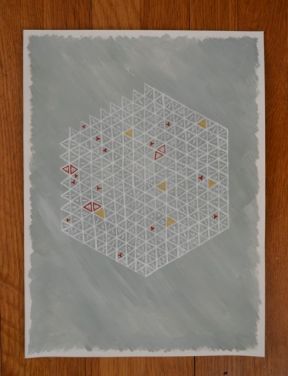 Next Thursday, Pareidolia opens in Gordy Fine Art and Framing’s “Nook” space! The show will feature seven small, mixed media drawings and will be held in conjunction with Drawing Practice. Not only are these pieces on special loan from the archives of the North American Pseudohistorical Society – not only are they also so brand new they’ve yet to be photographed- NOT ONLY will I be there in (sweaty)person to offer special insight into the weird world of Numerological Historiographs-  But the main event will feature work from BSU Drawing Professors and was curated by a Mr. Scott Anderson. Basically, coming to this show to see my work will be like going to see your friend’s community theater performance of Pirates of Penzance , y’know, because you’re an awesome person and  your community theater always puts on a decent show AND you happen to have a soft spot for Gilbert and Sullivan, when suddenly, at the end of act one Frank Zappa is lowered on a wire amidst glitter cannons to perform a new and particularly obscene version of “A Modern Major General.”
It’s going to be that epic.

“With many cheerful facts about the square of the hypotenuse.”

Also there will be snacks!

The opening reception will be Thursday, April 4 from 5pm to 8pm, and the show will run all through the month of April.